It doesn’t really feel like there’s an appropriate way to address what’s happening in our city and in this country. Since moving to the US five years ago, I’ve tried to listen and observe and be patient in my hope that things might shift towards true equality, people over profits, a clear path towards change. Change the country seems so hungry for.

It’s hard not to be swallowed whole by the endless cycle of hateful content that is broadcast in real-time, every day in the palms of our hands. It also feels a little empty, posting and reposting messages of support to the communities consistently impacted by all of this hate on social media, as if to say I’ve done my part. But there doesn’t seem to be an alternative to simply using words to show the love and support I have for everyone suffering out there. Not nearly enough, but better than being silent.

To our beautiful black community

What would American culture be without black culture? Some of the greatest filmmakers, musicians, artists, entrepreneurs, the very things that define the best bits of American culture are produced by the same people who are consistently oppressed. The same incredible, resilient people who are continuously targeted and terrorized. Words are never going to be enough, but I stand with you and I’m sorry the seemingly endless cycle of hate continues.

To our police force

I appreciate that you put your life on the line every day and your job is not an easy one to execute. But there’s just too many examples, too many videos, too many murders to ignore that something needs to shift immediately. Let’s not use excessive force against the people protesting the atrocities carried out by your fellow law enforcement, but instead turn your attention to the assholes who are destroying our city.

To the brave protesters

I’m in awe of your determination and because of you, someday, the change everyone is so desperate for, will materialize. Because you made it happen. Because you risked your lives and made your voices heard. Forever in your debt and eternally grateful for your sacrifice.

How could you? How could you destroy our neighborhoods? How could you loot and vandalize small businesses that are barely getting by? How could you, during a pandemic in which we are still in the thick of, spread hate and violence when our city is at its most vulnerable? WHO are you? Not the Angelenos I know and love.

This photograph by Charles Fretzin hangs in our home here in LA. We found it at the Sunday flea market at Melrose and Fairfax, a neighborhood that’s been ravaged over the past few days. To me, it always felt like it represented the complexities of this city. Floating, a little bit lost, a little bit lonely with no real way through. But it also reminded me of a Rage Against the Machine album cover, “The Battle of Los Angeles,” signifying there was reason to hope and reason to fight back. 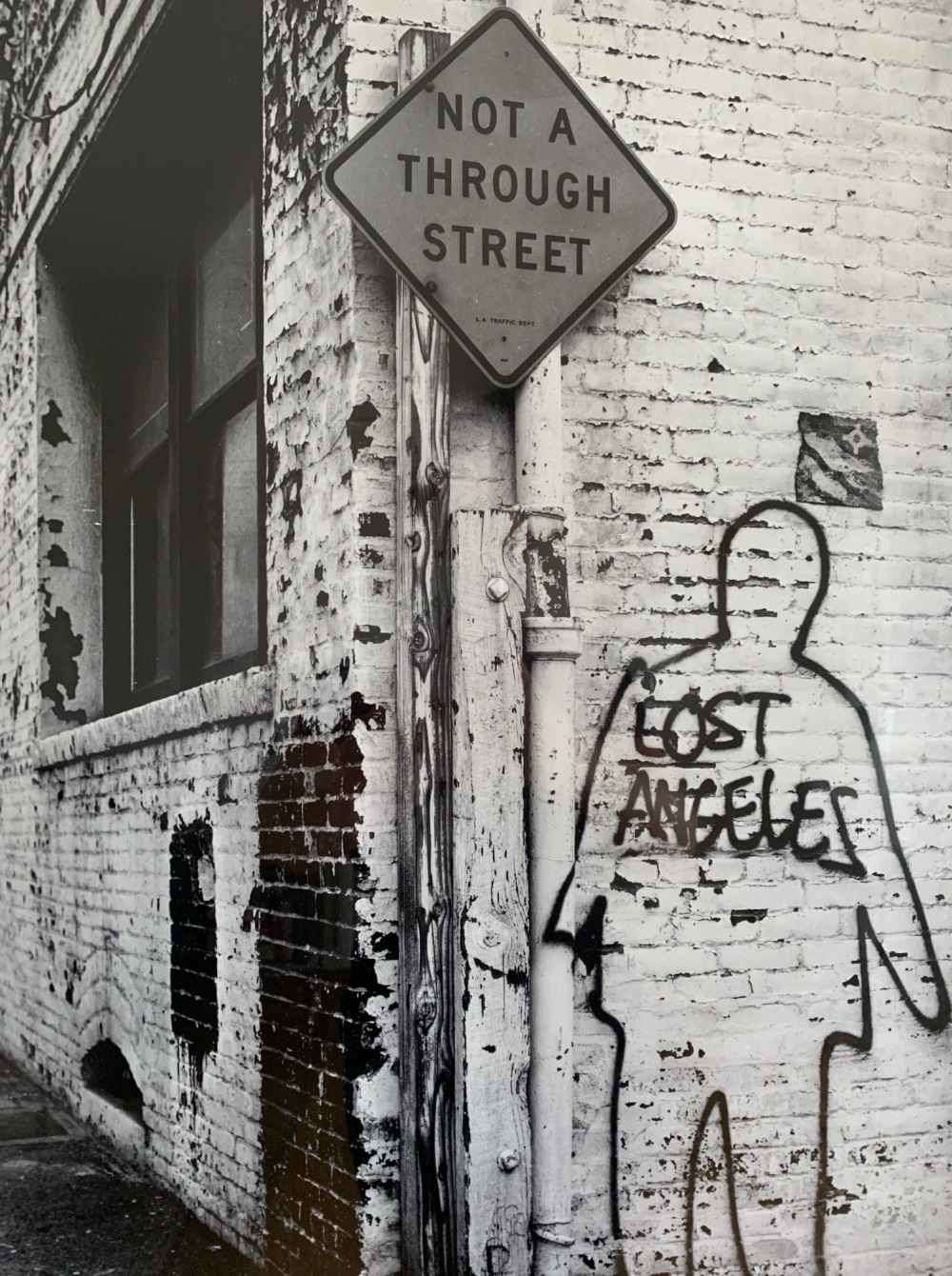 Sending so much love to anyone who has been injured over the past few days while peacefully protesting – it’s because of you that, someday, this country will be a safe and equitable place for all.

I’ve spent a lot of time in Hollywood since moving to LA, but now that I work in the epicenter of TMZ bus tours and feral looking Marvel characters roaming Hollywood Boulevard, there’s way more nuance to this storied city than I ever realized. The kind of stuff that gets lost in a blur of neon as you zoom by in your Uber car or hurry out of a theater.

I’m always fascinated by the stars people choose to photograph on the Walk of Fame. Like, why is Sigourney Weaver meaningful to you? What is it about Chuck Norris that would compel a grown man to lay down on one of the dirtiest streets in LA (America, maybe) to pose alongside a concrete star? (I know, Chuck Norris could lay down on broken glass and not receive a scratch, or whatever). I can’t remember the first star I photographed when coming to LA as a tourist, but I kind of like the stars located within a block of my new office.

The late Hugh Hefner, activist, feminist, American icon and editor of the most famous literary men’s lifestyle magazine in the world is there. Ironically (for lack of a better word) the late great Tom Petty is also immortalized on the famous boulevard within the same block. I’m quite certain I’ve photographed (read, Instagrammed) both of those stars in the past and sadly again in the past few weeks following both of their passing’s.

The characters I’ve encountered this week while passing Petty’s star in particular have been, as you could imagine, colorful. The hippie guy meditating alongside the piles of candles, flowers and empty booze bottles who awoke from his trance to pet my dog. The Native American fellow who had a little speaker setup playing Wildflowers tonight as he laid feathers down on the makeshift shrine.

There’s still evidence of old Hollywood too, if you really look for it. Not necessarily traces representative of the glamorous Golden Age, but evidence of the past. Like the abandoned Hollywood Center Motel (said to be one of Los Angeles’ most haunted hotels) on Sunset. A few beats down you encounter a run-down home with a neon sign that reads “Family Foot Care” complete with a squawking caged bird and ominous man out front. A charming old shop that specializes in classic violins. The old LA Weekly offices. History.

From where I sit in my modern, open-concept office, I have an unobstructed view of the Hollywood sign. It’s hard not to find the romance in that. The folks hawking tours of celebrity homes and the like don’t harass me anymore when I walk down Hollywood Boulevard. I guess that means I’ve graduated to Angeleno status. 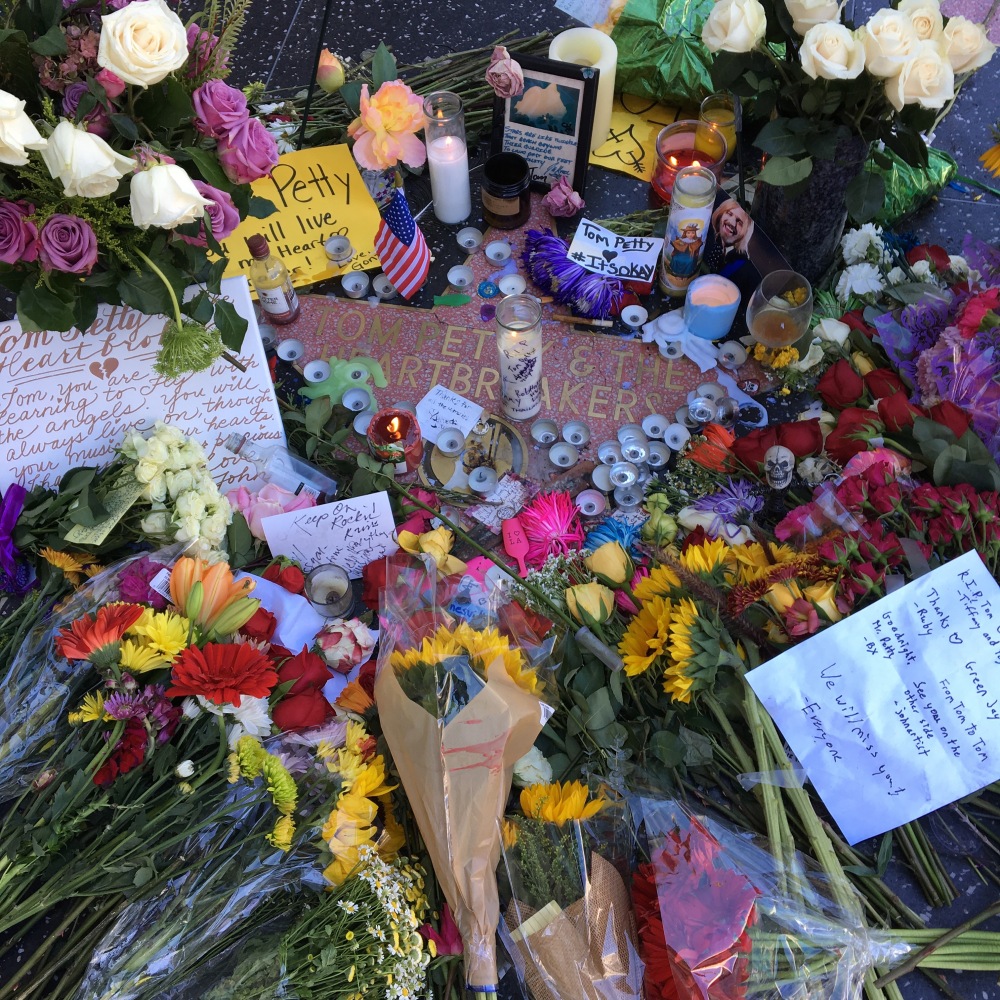 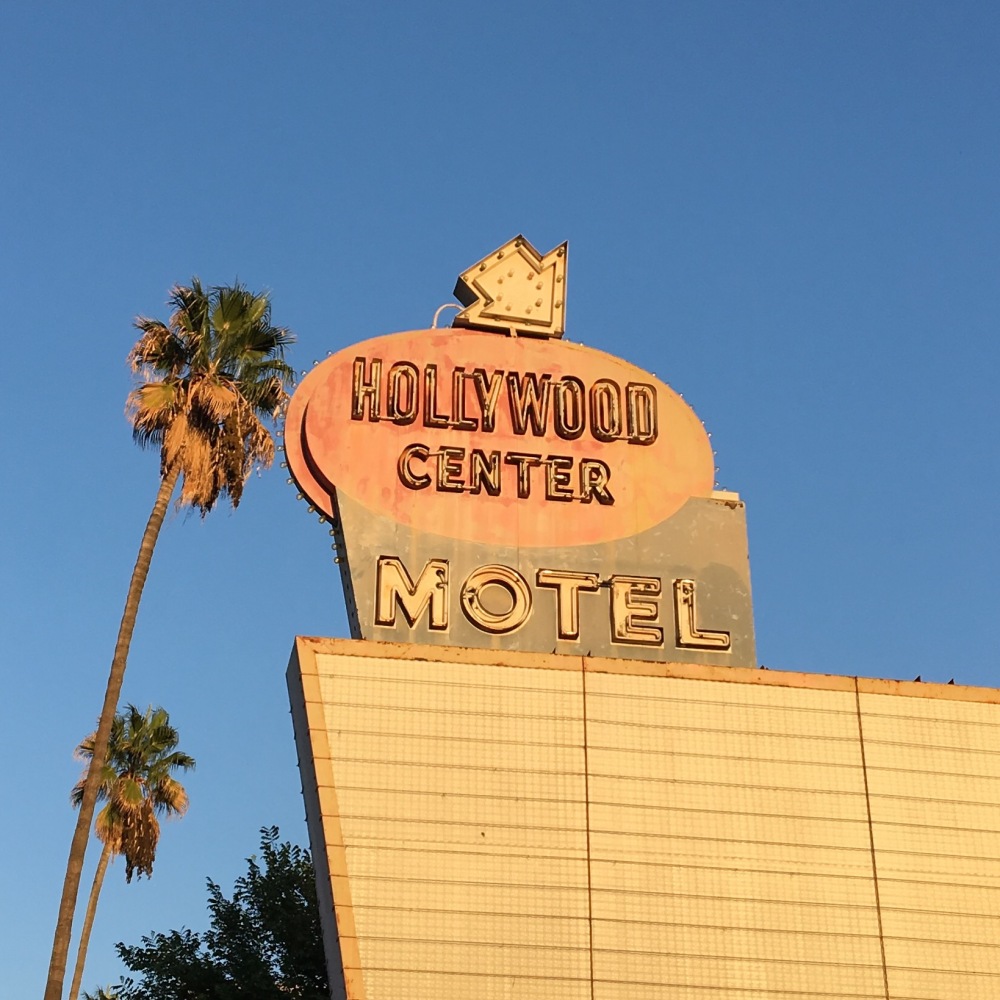